Who needs a kiln? 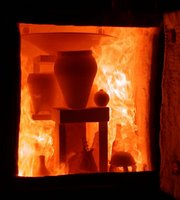 So I've come to realize that I'm a danger to humanity. I was making dinner last night (chicken salad with pecans, dried cranberries, and since I was out of celery *gasp* (forgot I had used it all for the homemade tomato soup I made on Sunday - yum) I blanched some asparagus and cut it up - it was very good) and I thought that I'd toast the French bread under the broiler. It was good, thick French bread and I knew that if I broiled it the bread would have a nice crunchy outside and remain soft and warm on the inside. So I put a little butter on it and slid it under the coils, as I've done so many times (I like my sandwiches with melted cheese). I walked away to make replies to the IM conversations I was carrying on with Matt and James. Seriously, maybe two or three minutes I was gone, I swear. I head back to the kitchen, open up the oven, and my bread is in flames! Sincere, flapping flames, licking the broiler, lighting up the entire oven flames. I grab the nearest towel and attempt to pull the blazing mass out of the oven without setting myself on fire. I actually manage to do this and swiftly turn around and stick it under the faucet. Well, as it turns out the little butter daubed on prior, means that this was partially a grease fire. Yes, water made the conflagration just a little more angry. At this point I dropped the plate, swearing. Eventually the bread soaked through from the bottom up and the blaze went out. I just turned the oven off and walked away.

In slightly less dangerous news, I attended my first ceramics class. Yet again my attempt at friend-making has been in vain. There are two girls in high school and six-ish women at least twice my age. Which is fine, I was just hoping to meet people my age. Oh, and also, I suck at ceramics. Yes, I know it was my first time, blah, blah, blah. But really, I mean it. I suck at ceramics; I'm simply being honest here. All the other students were able to make their little pile of clay into a cone and then back into a mound smoothly. I struggle to make it into the cone, then the top half of the cone breaks off into my hands, or the whole 'demmed' thing parts from the wheel. And I've never been so dirty in my life. I just kept repeating, "It's clean dirt, It's clean dirt." Marginally, I suppose. There was clay layered so heavily on my hands that it would eventually fall off from its own weight. I was covered up to my elbows. I noticed today that I had apparently sat in clay and it was caked into the seat of my jeans. It was fun. However, to those of you I promised art: Don't hold your breath.

When your SUV is so freakin' big it sounds like the delivery truck I'm waiting for, it's too big. Go buy a Prius, you selfish gas-guzzling jerk.

I now know why fate dictated me to read Mismatch. Yesterday a kid came in asking for books on the Japanese occupation of China. Weird.
Posted by Jackie Parker at 7:48 PM

Email ThisBlogThis!Share to TwitterShare to FacebookShare to Pinterest
Labels: klutz

welcome to the world of those who can think of something that would be really cool to make it but can't make it if their life depended on it. as head of this group i bid you a fond welcome and hope that you find your "artistic self"

hopefully I don't always IM you when you are cooking. don't need you place to burn down before I get to visit it.

1. don't light any candles...they are for decorative purposes only

2. your next purchase should be a dry chemical multiuse fire extinquisher (another trip to your favorite store - Target) and lots of baking soda.

3. When you have an oven fire DO NOT use water or flour.

4 Here are directions for various situations:
a. Slide the lid that fits the pan in
which you are cooking tightly over it, then turn off the heat and leave the lid in place until the pan cools. Never carry the pan outside; Jerry H. did it wrong and that is why his hands were terribly burned and are still scarred and he had to remodel his kitchen.

b. Put out cooking fires with a fire extinguisher or use BAKING SODA. Make sure you have a multipurpose dry chemical extinguisher in your kitchen and know how to use it; and

c. To put out an oven fire, keep the oven door shut and turn off the heat.

I see you have inherited my artistic ability, but isn't playing in mud fun? Expecially cleaning it out from under your fingernails.

You can be the remedial student. NO POTTER LEFT BEHIND.

Just so you have someone to comiserate with, I will tell you I suck at ceramics, too. I tried in high school, and it was disastrous. Time and practice does help, though. As far are you're fire goes, well, I don't want to talk about it. You scare me sometimes girl.

you know, why don't we just go and kid-proof you're apartment...cover up any sharp corners, rounded scissors, etc...

love Love LOVE what you've done with the look of the blog!! The links are so much easier to navigate!! V. COOL.

Dan, If kid-proofing my apartment would get you to come out here for a visit, I'm cool with it. As long as you promise not to include those damn plastic things that won't let me open my cupboards. I hate those things.

I think your class sounded fun! Wish we had pics of you after the class...would be good for some blackmail later on.
another tip your Mom left off..
don't ever try and melt wax on the stove top, opps, this is Jackie we're talking about!!! so just for you Jackie: DON'T EVER TRY TO MELT WAX ANY TIME OR ANY WHERE!!
J