Admit it, you still Love Queen. 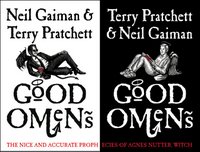 Way back when, in the days that I belonged to one of those mail order book clubs (we're talking junior high/high school, which is weird 'cause those things were totally for adults. I had such a liberal mom, which I didn't get at the time - we're talking sanctioned co-ed sleepovers, here. Shocking, I know!), I would see the summaries for the latest Discworld book by Terry Pratchett. I always wanted to read those, but I was utterly intimidated by the sheer quantity, not to mention the lack of a clear linear order in which to read (my downfall with the Pern novels as well, I read them until I could no longer quickly figure out which events took place first). Yes, I'm obsessed with chronology. Everyone knows that by now (what you don't know is my need for symmetry - and why has this blog devolved into Jackie is crazy?). Right.

While trolling the best selling teen book list on B&N and Amazon, I came across this title, thinking, Hey! New book unrelated to Discworld! Perfect intro to Pratchett! If I really like it, maybe it will inspire me to figure out that order! Turns out this is just now being remarketed to teens and was actually published back in the long ago days of the early 90's. Which I discovered on the CIP (because I'm a good librarian and always read that page. Psychotically.) I had read American Gods by Gaiman and thought "...That was interesting." I know that I found it more interesting than I would have had I read it a few years prior when I knew less about mythology. Speaking of the CIP habit, I was rewarded this time with the Caveat (and who doesn't love that word) located on that page. "Kids! Bringing about Armageddon can be dangerous. Do not attempt it in your own home." And that about sums up the book (get it? your own home! heh heh). At times I thought it was just a tad confusing, and it took me too long to read, and while it was a smidge predictable (when not confusing) it was wholly amusing, at times edging on hysterical. Very tongue in cheek and slyly funny. The ongoing gags like all tapes kept in the lead demons car longer than 2 weeks turn into Queen, are very funny the first 3 times, but after that, well, you start to express the same frustration he does. Perhaps it was more clever than I initally thought. Anyway, Since they've published The Wee Free Men and A Hat Full of Sky aimed at teens, this is a good step into the more complicated (and dark) Gaiman. +14
Posted by Jackie Parker at 3:46 PM