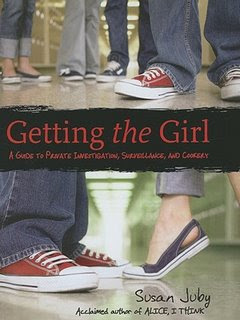 I'll confess. I haven't read any of Susan Juby's other books. I started Another Kind of Cowboy, but after a few pages I realized I was still scarred from Freak Show and couldn't go on. I avoided her Alice series (Alice, I Think, Miss Smithers, Alice MacLeod: Realist at Last) despite good reviews, because I was having a difficult time separating it from the Phyllis Reynolds Naylor books; a syndrome I have about similarly names books; see Nothing But the Truth (and a few white lies) by Headley and the book by Avi I read in junior high that shares the first half of that title. I don't like to read two same-ish titled books out of an, I don't know, twisted loyalty to the first book, or more likely, the idea that there would be some Back to the Future-like conundrum where the world would cease if I held both plots of same-titled books in my head at once.

I was wrong then and now; not reading Juby's other books?* "Big mistake. Big. HUGE." Getting the Girl is a laugh-out-loud mystery. A funny book? A mystery? Aimed at teens? Omg. I'm happy to encounter ONE of those qualities in YA books. Add in a side detail of food and cooking? I think Juby wrote this book just for me. And all the teens I'm going to make read it. Will this make it into my summer booktalks? Yep. And to make it even more awesome, I can talk this one up in both the middle schools and the high schools. Making MY life just a little bit more easy.

Shall I stop gushing and tell you why I like it? Hell, why not.

Sherman Mack is really into Dini Trioli. She's the perfect girl - cool, aloof, older. Sherm is sure an older girl will appreciate his sensitive ways, despite her dating the popular jock. But when he figures out that Dini is in serious danger of getting D-listed and ostracized by a cruel school ritual, he decides that if he can uncover the D-listers and make the school safe for all girls, Dini will have to fall in love with him. What he doesn't know is that there's physical danger, a pink bike, some crossdressing, and a burnt omelet in his future.

Short chapters help with a snappy pacing that's in tune with the book's sharp and witty dialogue. There's certainly a level of predictability with the plot and romance, but it's with the B-level lines, so it provides more a level of comfort than an annoyance; Juby maintains a balance between predictability and surprise (humor helps a ton with this) that will please readers coming from different interest points (mystery, romance, humor, etc).

It's been so long since I've read something I've truly fell in love with. Not since Ellen Emerson White, and I've been making the EEW love last a long time by reading the out of print stuff at the rate of about one a month. The added bonus with Juby is that it's going to be so much easier to sell than EEW due to the better covers and the more plot-driven story (rather than EEW's entirely character-driven ones - although I was able to sell THE ENTIRE President's Daughter series to an aspiring writer-teen last week. Which made my day.).

Anyway, Getting the Girl should be a sure bet across the board. Well, maybe not for the emo kids. It would cheer them up and ruin their demeanor. We wouldn't want that.

*And let us not forget that there is another teen book called Getting the Girl. One by Marcus Zusak. But as I'm not convinced by Zusak; i.e. yes I, too, believe Book Thief is brilliant, but as I Am the Messenger made me want to die slowly, I don't care a whit. Therefore, my opinion is still out on the man. Also, I haven't read Zusak's version and have little to no intention to do so. Especially not with a subject heading of "self-actualization (psychology). Fiction." ugh.
Posted by Jackie Parker at 5:51 AM 8 comments:

And there's my completely cheesy answer...

to the rgz monthly theme.

Really. I should have spent more than those 10 minutes on it.

At readergirlz. At Buildungsroman (it's the same both times).

All the same. If you're reading this, you are probably part of the family I speak of. Unless you are reading this with malice. Then you aren't.

Also, while my blog promises tend to be hollow, I think you'll get a book review sometime this week. If you like that kind of thing. If not, well, stop being so malicious.
Posted by Jackie Parker at 7:47 AM 3 comments:

Email ThisBlogThis!Share to TwitterShare to FacebookShare to Pinterest
Labels: readergirlz

Rgz gets an Innovations in Reading Prize!

This just makes me so happy. Partially, because they asked me to write a letter of recommendation for them, also because they honestly needed the money to continue making it all happen, but mostly because they deserve it.

Here's the list o' winners. Read more about it at the rgz blog.

While we're talking about readergirlz, this month their theme is family, and we're focusing on RED GLASS by Laura Resau. I read Resau's book back in 2007 when I was a Cybils nominating panelist. Since it became a finalist, it would be safe to assume Red Glass is a good'un.

If you haven't noticed, rgz has recently separated from the refresh-madness of the MySpace forum, opting for a more live-action chat with CoverItLive on their blog. The chat with Laura Resau will occur there on Wednesday, May 20th at 6 PM PST/9 PM EST.

IF you have something to say about what family means to you, get ahold of Little Willow. She'll be posting answers to that question all month long at Bildungsroman and the rgz blog. My answer should be going up tomorrow-ish.
Posted by Jackie Parker at 1:35 PM No comments:

Email ThisBlogThis!Share to TwitterShare to FacebookShare to Pinterest
Labels: readergirlz

I don't remember whether or not I met author and librarian Bridget Zinn at the Kidlitosphere conference in Portland last fall. But she was there.

Currently Bridget is battling cancer. A rather severe and expensive cancer. Jone MacCulloch, the woman who spearheaded the Portland conference is now taking on an auction to help Bridget out with all the bills that this disease is racking up. Read about Bridget here. Email Jone (macrush53 [at] yahoo.com) if you think you can help. Otherwise, take a look at the online auction and bid on something.

If biding in an auction just won't fit in your budget, and even if it does, I encourage you to check out Bridget's blog and lend her your support that way.

Thanks.
Posted by Jackie Parker at 4:57 PM No comments: