What? Almost OCTOBER? Well that means....

I am again heading up the Young Adult Fiction category! I'm honored and amazed that they are letting me do it again this year (suckers). The panel was announced earlier today on the Cybils blog. I'm so excited about the participants this year (this is not to say I don't love everyone I've worked with on this panel for the last two years. I do. Most definitely.), there are some new names, and some old names, and some people I'm just really happy to maybe have the opportunity to get to know better. And SO, HERE'S THE 2008 YA FIC PANEL!:

Panelists (Round I judges)

The FUN begins on October 1st!
Posted by Jackie Parker at 12:11 AM 5 comments:

Email ThisBlogThis!Share to TwitterShare to FacebookShare to Pinterest
Labels: Cybils 2008 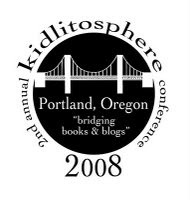 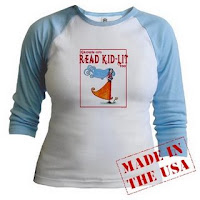 HOWEVER, I am going to the Kidlit Blogger's Conference in Portland next weekend (hmm. perhaps I should buy me [and Colleen]some train tickets...). It's going to be the best blend of fun and info, so if you haven't already decided you're coming - now's the time. TUESDAY is absolutely the very last day to decide on it. They've got to know by then. Take a look at who's coming. And what's happening.

If you know you can't come, but want to support the cause, check out the Cafe Press page. I want that shirt.
Posted by Jackie Parker at 7:35 AM No comments:

If I slid off the dome would I get hurt? 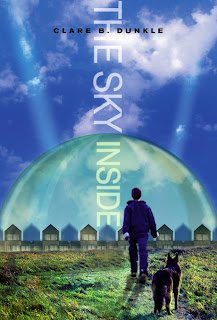 It starts out grim in the prologue:

"The big television camera of the You've Been Caught Napping game show prowled in the darkness at the edge of the set, their lenses focused on the old man's face...A thoughtful viewer might have wondered why he didn't wipe the sweat away. But behind the silver podium that displayed a very high score, his hands lay trapped in a pair of strong plastic manacles. That was something those cameras couldn't see...The old man rested his head on the podium in front of him, the one that hid their nasty secret. After all, game shows were rollicking good fun, entertainment for the whole family. Imagine how viewers would feel if they saw the hypodermic needle inserted in his arm" (pp 1-2).

Martin lives in a dome. All of his needs are provided for him by computers and bots. The weather's always nice. Even when he fights with his genetically engineered and brilliant little sister he still loves her. Life is perfect. But why doesn't his mom like the game shows? Why do his parents argue in whispers at night about things his father sees at work? Why are all of the adults so afraid come inspection time? Slowly, but surely, Martin begins to see cracks in his perfect domed world, and when some weirdo comes and takes Martin's little sister, and all the Wonder Babies away, Martin is sure she's in need of rescue. But how exactly do you escape when the walls have ears? And even if you can escape, isn't there a reason everyone lives in domes, protected from a hostile environment?

So, you've got your basic dystopia crossed with an epic quest. Sounds like a magic combination, right? In fact, there are many things to like about Clare B. Dunkle's The Sky Inside. The scenario is compelling. The characters feel genuine; once a close look is taken it is clear that below the surface people are conflicted with their environment; no one is without their flaws, but no one is completely evil. All of these qualities are fantastic. It's something we should demand in every novel. But. Sadly but. There were holes. Plot holes. And a couple other issues.

Many holes can be filled up with a sequel, but in this case I feel the plot struggles to truly stand on it's own: How did Martin happen to get Chip, an illegal modified bot that solves all of the problems and challenges that the boy encounters. In fact, while charming and all, the whole Chip character was a total device - very deus ex machina. Every. Single. Time. Martin ran into a deadly test the dog took care of the problem - or told the boy what to do. Every. Time. On top of that, why did adults in the neighborhood not notice that Chip was modified? If the "the walls have ears" why didn't they catch Martin & Chip before they even left the dome? If what they saw was reasonable malfunctioning, I don't feel the case was made for it. I wanted more World History; the adults all seem to know what's going on, but there wasn't enough information given as to the WHYs of the domed communities, or how long they've been living there, or what the suburb names mean.

So, ultimately the gripping scenario couldn't overcome what, for me, were gaping holes in the story. I'm a pretty forgiving reader in general - I'll overlook a lot of issues if I'm entertained, but I really don't feel as though the potential was met in this title. It won't necessarily stop me from giving this book out, because I know most young readers aren't going to be as critical as I, however, because of how dark this book starts out with the game show murders, I will be careful not to give it to kids prone to nightmares.

Even so, I didn't stop reading the The Sky Inside, I truly wanted to know how it all turned out. Of course, there isn't any real resolution. One must presumably wait for the sequel, The Walls Have Eyes It makes me sad. Such potential. I like dystopian novels.


These people disagree with me, so find your balance there:

Becky's Book Reviews
Mrs. Hill's Book Blog
The Magic of Ink
Milkbreath and Me
I really do appear to be the only one with issues: Author Site

Read it yourself, let me know what you think. Sample chapters.

Obvious comparisons to: The Giver, The City of Ember (4th book arrived on my desk this week!), The Hunger Games (for older kids and out next week!!), Gregor the Overlander, etc.
Posted by Jackie Parker at 10:15 PM 8 comments: