Minus those annoying bimbos! 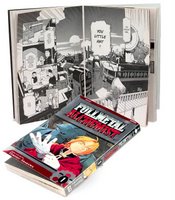 I don't remember how this graphic novel attracted my particular attention, but I distinctly remember actually knowing what the kid was asking for when I placed a purchase request for the series. The two things together (me being aware of it, and a kid making a real effort to get it) told me that clearly, if I read only one Manga this year, Fullmetal Alchemist would simply have to be it. Chose well, I did.

I'll admit that I haven't read a ton of Manga. What little I've read has rather turned me off with the half nekkid girls bouncing around with their improbable anatomy. But that's just a style thing. I've liked Bleach and hated Love Hina because of the insufferably stupid storyline (IMHO). But this. This is my new favorite. Not that it's usurping anything else.

The series opens with the Elric brothers, Edward and Alphonse, on a mission to find out what's upsetting the natural world's balance in a small community. Ed is the state alchemist (alchemy being, of course "the mystical power to alter the natural world"), his brother, a gigantic suit of armor, his sidekick. Note the irony of Ed, the puny one, being The Fullmetal Alchemist - not his metallic brother. Turns out that the town has been co-opted by an evil pseudo-religious leader (insert tasteless joke here). Our hero's must reveal to the citizenry the truth behind the sunflower, using both brain and brawn.

What makes this good. There is a clear character arc. There is genuine depth to the brothers - a task that I'm always impressed with when all they have to work with are bubbles (well, ok, and art or whatever). They have flaws, and there is room to grow. It's very much like a TV drama where each episode has its own purpose and plan, in addition to the season's (or series') overarching goals. Amuse me with today's story, and ever so slowly inch me forward toward the ultimate resolution. And Dramedy gets me EVERY time.

Any terribly religious person might get offended by the opening sequence with it's, er... obvious correlation between the "Church of Leto" and popular religions of our day. Other than that, this really was wonderful, and I can't wait to read the rest, I think that it will appeal to even non-Manga fans (such as myself), and I think that the fact that it appears to be on television helps as well... +11
Posted by Jackie Parker at 10:26 PM

I think it's pretty safe to say that you are not the intended audience for "Love Hina" (neither, for that matter, is anyone without a Y chromosome).

I suggest you try "Rurouni Kenshin." Aside from recommending it because it's my personal favorite manga (and anime), it also has plenty of action, great (and evolving) characters, interesting storylines, dramedy, and a general lack of well-endowed bimbos with air for brains.

Full Metal Alchemist is on TV, it's on cartoon network at like 2 a.m. (thank you TiVo!) I watched the whole series because a friend recommended it and I too was impressed with the storyline. From what you said in your review, it sounds like the graphic novel is the same as the TV show. There is also a movie that caps off the series, but it hasn't been translated to english yet.

Anyway, I tried getting Sara to watch it, but she absolutely *hates* it. I don't know why because I don't think she ever watched an episode!

Hey, I watched like half the episodes...and I don't think they know what alchemy really is.

The manga series and the anime series are very close (some minor differences) until you get to about volume 9. Then there is a major divergence, with manga characters that do not exist in the anime. My understanding is that the anime was begun before the manga was finished, so at some point the anime creators had to guess where the manga author was headed. I rather enjoy this, as it means that even though the anime series has finished its run, I can still look forward to each new volume wondering what's going to happen next. It's like an another alternate universe!