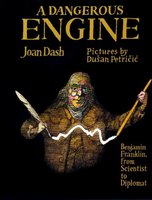 Ah, Benjamin Franklin. I'm not a big reader of the non-fiction, but for Ben Franklin... I didn't plan on reading this whole book. I just thought I'd browse through it, read a few anecdotes, be amused and informed and move on. Or it could suck me in with it's clever stories and slightly odd chronology. A Dangerous Engine is not, in fact an invention of Franklin's, it is the man himself as dubbed by random (and probably important) European (hey, I'm not ethnocentric!). It focuses primarily on Franklin's experimentations with electricity and how those findings placed him in a position unique among his colonial colleagues. Because of his scientific exploits, Franklin, before he was even aware of it, was an international celebrity. The respect he garnered from overseas made him the natural choice as the budding nation's de facto ambassador. That and he was a crazy clever dude. Can I have a crush on a old guy who's been dead for 200+ years? Whatever.

Bits that struck me as funny: "[In France] fashionable circles discussed scientific subjects in the evening when they met at fashionable homes; these gatherings were ruled by women, well educated, exquisitely dressed, and charming, for France was not England, where society was ruled by men of noble birth who excelled at shooting birds" (p 70) hee.

Also: "Madame Brillon was a talented musician and composer in her early thirties, married to a treasury official many years older; John Adams believed she was one of the most beautiful women in Paris. She called Franklin 'mon cher Papa,' ... As she told Franklin, 'People have the audacity to criticize my pleasant habit of sitting on your knee'" (p 152) !!! Yeah, Abigail Adams didn't so much like the woman (or Franklin).
Posted by Jackie Parker at 7:03 PM

And who can forget Ben Franklin as portrayed in "1776".