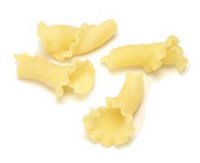 If the pasta pot overflows and it's an electrical stove, will you get electrocuted?

I've discovered that one of my favorite things to do every day is to make dinner. With the unconvinced help of Darling Dan, I got my speakers working on my stereo (unconvinced, as he didn't really do anything, just looked at his stereo 2,000 miles away said something along the lines of, yeah, that's what it's supposed to look like, and listened to me babble until I finally realized that the spare headphone jack was still jammed in the outlet from the move, I took it out and, viola! But without him, I wouldn't have been looking at the stereo with the analytical eye that I was). Cooking to music rocks. I like to cook anyway, but with the iPod connected to the stereo, there's atmosphere. Atmosphere of complete randomness, but hey, who doesn't want to radically change genres every 3.5 minutes? Tonight I went for the pesto pasta. I chose campanelle, which looked cute uncooked, but now, on my fork, covered in green flecks kinda looks like what I imagine the inside of an ear looks like, so it's a little less exciting now. In the pesto sauce I simmered tofu (b/c it was left over from the curry soup and it's cheaper than eggs, not that I would but eggs in pesto, ew) and halved grape tomatoes. The tofu is pestolicious, and looked gorgeous in the sauce alongside the red tomatoes with the bright green sauce, however once tossed with the creepy pasta, now looks disconcertingly grey, leading to the ear problem. It tastes great though, so whatever.

I really didn't sleep well last night. I blame the totally stupid decision to eat coffee ice cream at 9pm, but at the time I was thinking, "Oo, ice cream!" not, "Oo caffeine!" Whatever the reason, I didn't get to sleep until after 4am (alarm talks at 7), so I was expecting a completely miserable 3rd day at work. The morning sucked, but after that I actually got to work reference! It was nice to get back to it. Speaking of desk work and not sleeping, I got a lot further in Eldest last night, and a kid came in today, all proud because he had been first on the list for Eldest, and he wants to make sure that he's first for the next book too. I, of course am working with some bored old guy on when audiobooks were first invented, and the kid is working with the nice older parapro who doesn't have any idea what the kid's talking about. I can't quite hear everything the kid is saying so, I'm all freaking out inside that the kid knows something I don't and that Paolini's written like the wind and the 3rd's pub date has been announced and I knew nothing of it, which is silly. So when blue-hair stumbles around trying to spell Paolini and the kid's no help, I clearly had to jump in and find out what was going on. In the interest of helping out a co-worker, of course. The kid really was just checking, in the hyper-paranoid-excited way of 12 yr-old boys. I did have to sadly inform him that I was sure he'd have to wait at least until about two years.

Ok, then, boring life in far too much detail...
Posted by Jackie Parker at 7:31 PM

TOFU?!! It didn't take long for west coast culture to sink into your life did it? Tofu. I just don't know about you Jac.

are you satisfied with "eldest" thusfar?

Hey - I've always liked tofu. It's just totally cheap out here, so it's more novel. Now that I'm thinking of it, why are you so down on the bean curd of love?

MMM... tofu. The other other white meat.

What can I say except I love meat more.

You know how I feel about tofu...but on a serious note, when did I miss the 4th book in the Bean part of the Ender series?!?!

Ok, Guess Who is totally unfair! Without knowing who you are, I do not know how you feel about tofu. With the OSC reference, the only people I can think of who would be outraged about missing Shadow of the Giant would be Ray and Josh. I don't think Ray reads this, but his best bud does, so it could be him, but I seriously doubt that he would miss the book. Josh, I can definately see missing the book (sorry) but I haven't the faintest idea how you feel about the tofu issue. Ray, yeah, we might have talked about tofu at some point, BUT IT'S NOT LIKE I REMEMBER, I remember you don't eat pork, which, in my world, means you have room for soy, and you did come from CA. Or all this could be futile and it could be someone else entirely. Argh.

It was Josh, if anyone was spellbound by suspense.