No one's ever on Google Chat when you need them to be.

So, I'm opening this up to the people I should have opened it to in the first place: You. The people who actually read this blog.

You'll have to get out of your RSS Readers for this one, though. That's right. Click on over to the site (it's http://interactivereader.blogspot.com if you've forgotten.)

I have gotten bored with my template. It looks just like everyone else's. So I changed a few things. I need you to tell me in the comments what you think about those changes. It's ok. Be honest. I'll wait.

Ok, cousin Bill appeared, and as he's getting a degree in graphic arts or something equally design driven, he's taken pity on my sad librarian soul and is looking into better palates for me. So, let's watch the evolution! 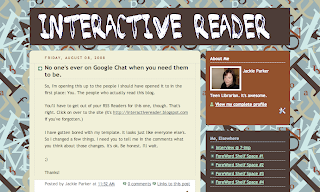 Bill said it was CRAZY busy and my words had to compete with the background. Which is pretty much what I was fearing. So I switched to: 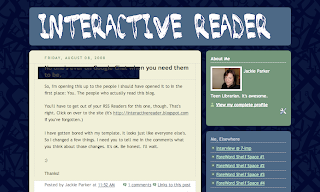 Which, as most of you realize is depressingly close to the original design, but with some variation in the background, along the lines of the first experiment, only less insane. BUT, as you can see in the screen shot, I've acquired a rather obnoxious block over the post title, that I haven't figured out how to fix yet... 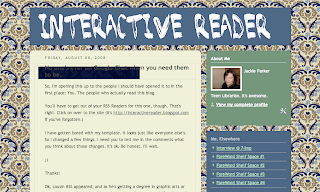 Bill said "oh no no no, you don't want to use the pattern" when I uploaded this one. Which, kinda fit what I had been thinking as it was even busier than the first one he didn't like. He just make it for the palate, apparently. After quizzing me for what I want, he went off searching for a background that he liked. Unfortunately, he's now decided that he doesn't actually LIKE anything he's found, so he said that he'll have to make me one. (score!), BUT he doesn't have time now... so... I'll just stick something random in there until he gets a chance... 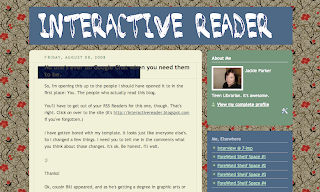 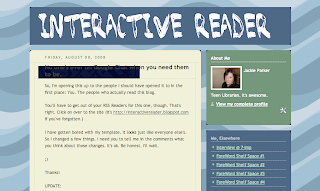 It's so FLAT compared to the others... 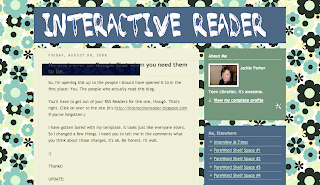 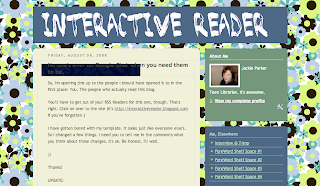 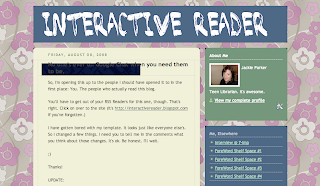 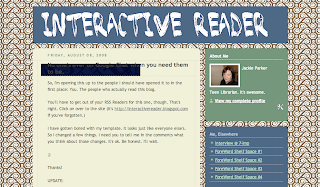 I think now that I'm just changing the background because I don't want to clean the apartment, and I'm quietly hoping that one of these times it will just magically fix that evil box. 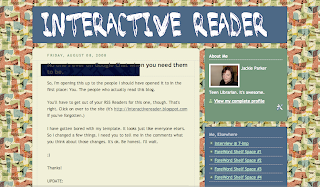 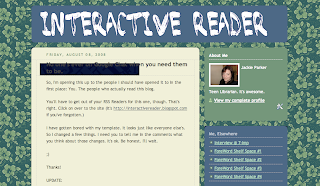 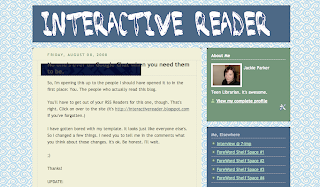 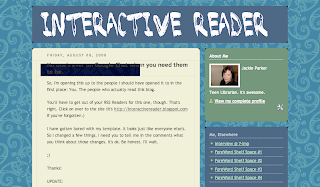 I guess what is making this difficult for me is the fact that I don't know what I want out of it. What kind of identity that I want to convey with the site. What colors do I feel like to you guys? (man, that's a crazy question)

Let me know what you think.

(Oh - and if anyone knows how to remove that block, let me know!)
Posted by Jackie Parker at 11:52 AM

IMHO the background is way too busy, especially on the sides where nothing else is going on. I like the header though.

I like the colors of the busy one but instead of having the crazy letters (they are cool but are a little busy) just having the background that pretty greyish blue color. The second option doesn't look different enough to me.

I'm trying to avoid just a flat background, though. I do like that gray/blue color, though.

I'm voting for #13, but you'll need to remember that the closest I've come to an artistic sensibility was being an art librarian.

#11! Hands down, and it matches perfectly

I like the one you have right now (the last one).

While reading your post, I thought, "I ought to give her the link to Squidfingers for backgrounds. Then I kept reading and starting cracking up, because I could tell you'd found that resource. :)

Maybe go with 11, but more muted - not quite tone-on-tone, but perhaps pale blue on blue instead of green on blue?

...to which I add, "Duh, you already knew about the word-obliterating bar." Sorry. I was so amused to be able to tease you about being on a "jazz up Jackie" trend (Hair? Site? Is this something else I can blame on Kyle?) that I forgot to actually write the fix suggestion!

I made TechBoy go through your HTML, and will email you something helpful in a little bit. Meanwhile, I like the sort of swirly background thing you have now, although it totally clashes with your hair...

I think I like the last one the best, the turquoise paisley.