Do YOU want a song written about you? 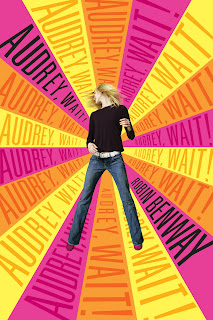 And the next book in the great backlog of books I have to return because there are holds: Audrey, Wait! by Robin Benway.

Side note: Her blog totally sucked me in. It also sent me here, which has given me LOTS of inspiration for my sewing machine adventures. It also makes me want to visit Mood (thank you Project Runway!) No, I don't know how to sew. Yes, expect disaster. Don't worry, if you want, I'll document it.

Right. So, Audrey breaks up with her boyfriend. Pretty normal. He didn't do anything specifically wrong, but they just sorta grew apart. As you do. The only problem is that Evan has a band and he writes a song about their breakup. A song that not only catches on, it becomes a huge mega-hit, and Audrey and Even become household names - to the extent that Audrey is followed around by paparazzi. Living a normal life and trying to catch her new crush is a little harder when your every move is posted online.

I'm trying to think of something negative to say, if simply just to balance out the fact that everyone who reads this book loves it. Everyone. I'm serious, try to find a negative review. Well, except that one on Amazon where some little kid was reading it and the parent got mad at the sex/drugs/rock 'n roll that was, quite appropriately, there. There's no way it would have been believable without any of that or the swearing. So, don't give it to your 9-year-old. Not hard. But, I can't think of anything negative. It's a good book. Fun. Funny. Well-developed characters. One of those good rousing speeches near the end that you know is coming, but that you can't help but be fond of. I like to be able to like and root for my characters.

The whole plot definitely takes advantage of the weird celebrity society we've cultivated in the last decade. Audrey hasn't done anything out of the normal, and she's suddenly, against her will, plunged into a role that's akin to the second coming of Paris Hilton (ew. ew. ew.). It's not the first book to deal with unwanted celebrity (another favorite is Amazing Grace by Megan Shull. See more courtesy LW.), but it deals with the during, rather than the more commonly depicted aftermath.

Hopefully not done with the site. My cuz should be working on it...

omg, did you see sunday's issue of unshelved?! http://www.unshelved.com/archive.aspx?strip=20080824

I still have to read this one - still waiting for library circ.