I want to use it as a manual to do illegal things... 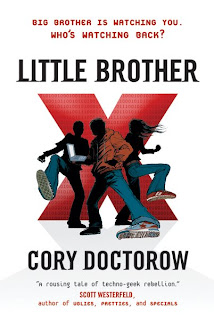 It's been a while since I've read any science fiction. Actually, calling Cory Doctorow's Little Brother science fiction might not be accurate. On one hand, it's set in the very near future; on the other, the world he creates is entirely recognizable - the tweaks he made are small and plausible. It's merely an advancement of today's technology perpetrated in the name of a good techno-thriller.

I'm going to be honest here. I didn't know who Cory Doctorow was. Colleen and Dawn were all excited about the book, and they said his name with a slightly awed familiarity so that I had to pretend to know who they were talking about, nod and say "yeah" knowingly. But it sounded interesting, so I thought I'd give it a go (and now you know how to spot my lies).

Basically, in the wake of a massive terrorist attack, Homeland Security swoops down into an already security-conscience San Francisco and starts abusing their power, treating citizens (especially teens) as suspects. Marcus Yarrow, your average, everyday computer genius teen, having been kidnapped by the government, tortured, and let go, has sworn that he will fight Big Brother and return freedom to his city. More or less. Mostly he's just pissed that he got tortured, and that no one knows where his buddy is.

It's quiet references to current injustices of our government are a sad reminder of how few steps away we are from exactly the environment Doctorow portrays. When Marcus is in custody, effectively "disappeared," I can't help but think of the guys in Guantanamo Bay. Unjustly held, without enough evidence, subjected to policies made especially for the trampling of rights. How long before those policies jump the 90 miles? That's part of what Doctorow is exploring in this novel; how willing people are to adopt artifices of security just to feel safer - regardless of whether they actually ARE safer (yes, go ahead, quote Ben Franklin, I know you want to).

But there I go with my raging lefty politics...

I'm clearly anti-authoritarian enough to find kinship in the pages of Little Brother, but what impresses me most is that all of the politics and musings on liberty and freedom are in a immensely entertaining and readable book. The questions raised are ones we all should be asking ourselves - and if we are lucky - the younger generations ARE asking them (I'm reminded of the teen who told me the other day that Google was evil and taking over our lives and privacy). BUT that there was no whiff of didacticism to be found. I've also learned a great deal about technology, and have investigated some of what was mentioned.

It's made me second guess getting this, I'll tell you that. I'm not going to now. I'm totally creeped out by the idea after reading Little Brother.

I stayed up WAY too late reading it. I hadn't done that in a long time (well, if you don't count this, but I'll get to that one.) And if all of that still doesn't make you believe me that it's worth your time? As Leila pointed out - it's available free. Give it a few pages. You'll be hooked by "sucking chest wound." It's The Gospel According to Larry meets Scott Westerfeld.

You can also see him read from his book while on tour for it. Sadly, I missed his visit to Seattle in order to go visit Kyle, and, um, read the book. Had I read the book BEFORE he'd been in town I probably would have ditched the boyfriend to see Doctorow at Secret Garden. Sorry Kyle.
Posted by Jackie Parker at 10:16 PM

"Sucking chest wound" will always remind me of BtVS!

Based on your suggestion, I actually read this book. And loved it, although it freaked me out. Everything in this book is plausible, and most of it is probably happening NOW.

I am off to get Jenna Fox this weekend.