Secretly, we all want tiaras. 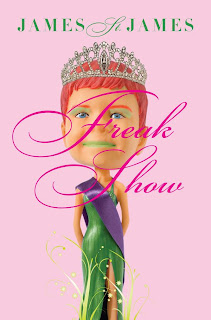 Ok, now that's out of the way, let's return to blogging BOOKS. What I know most of you are here for in the first place.

I kept hearing how funny Freak Show was. That's what all the buzz was about with this book. But, see, there's something you need to know about me. I don't cope well with embarrassment: not just MY embarrassment, but any embarrassment I see - embarrassment of others. That's why I couldn't really watch Arrested Development or The Office. People, even fake people, in those shows are constantly being placed in situations I consider mortifying in their degree of embarrassment. I don't know how to react - yes, clearly laughter is called for, but I can't get past the uncomfortable empathy I feel for them; I put myself in their place and can't help but feel what I would if I were in their place. This is why I tend to prefer snarky, ironic or sarcastic humor, rather than situational (which is partly why I'm ADORING Long May She Reign at the moment). ANYWAY. All of this leads me to feeling mildly uncomfortable for most of James St. James' novel - starting from the very beginning. If it hadn't been nominated for a Cybil Award, I never would have picked it back up, nor would I be sharing my pain with you now.

On top of that, I kept finding myself thinking that the best format for this story would have been a flamboyant off-Broadway musical. It's just so outrageous. When not painful, although ultimately, kind of sweet. Yes, what a contradiction. The writing's like that too.

What's it about, you say? Well. So, you've got Billy Bloom. He's become too much for his mother to handle after she found him trying on her cocktail dresses, so she's shipped him south to Florida and his mostly absent father. No longer in New England, he's shocked to find himself surrounded by conservatives and Bible-thumpers "Because when they're being hateful, they're being hateful for God" p36. This doesn't go well for the young man who thought attending his first day of school dressed in a "ruffled lace shirt,unbuttoned down to THERE. High-waisted blue pants, practically sprayed on....A thrift store military jacket...a crimson sash..." p 11-12 was a good idea. Because, "what's straighter than a pirate?" p11. It just gets worse for dear Billy.

He is an interesting character. A "reality is for everybody else" (p 4) attitude tips you off to the thought that dear Billy might not exactly be the world's most...reliable narrators. He makes his own reality. The conflict is that reality has suddenly become too harsh to hide from. Up to this point, Billy has been able to create his own world with his own rules, but now he must find the strength to deal with the real world, force himself to recognize how most of that world will respond to him - and then find the courage to continue being himself in the face of that recognition. It's not a small feat, nor it is an easy read. Terrible things happen to Billy.

However, no matter how thematically important this novel might be, future readers prepare yourselves for a narrative that is all over the place and that often descends into stream of consciousness. Also, an unbelievable number of lists.

Other bloggers say:
The Ya Ya Yas
Confessions of a Bibliovore
Worth the Trip
Posted by Jackie Parker at 1:09 PM

I have to say: I'm with you on that. I have never managed to even watch an Eddie Murphy movie - much cringing and agony. Writing things like that is really hard, and I've just finished reading Spanking Shakespeare, also cringe-esque. Ugh. Thank you for reading this book so I don't have to...!

And about the tiara thing: what do you mean, "secretly?" Sheesh.

I can't believe your not a fan of The Office and Arrested Development. They are seriously funny. How did I not know this about you??

I've never been able to enjoy "I Love Lucy" for the same reason. I've been interested in reading this book because I've heard such praise for it, but now I'm wondering if I'll be able to enjoy it.

Ditto "I Love Lucy" for me. Of course, now you've made me more curious about the book than I was. Guess I'll move it closer to the top of the stack.

Totally with you on the embarrassment thing - I can't watch Ben Stiller movies.

And I am soooo sad that you're moving! We'll have to get together when I visit the fam in Bellevue.

This was such a sad book that I couldn't laugh. I agree with you.