Let's just stick with a theme. 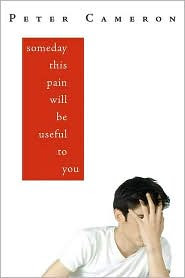 Sort of a...I don't know...is it a depressing thought? Seems to just say grin and bear it, you'll need the experience/lesson later. It's a rather painful example of delayed gratification, if you ask me. ie: You'll be so happy in 10 years that you hurt so bad! It'll all make sense then!

I mean, not that it isn't true, in my own little world everything eventually makes sense, and everything is something to learn from. It might not be exactly what you expect to learn from the situation, but all the same, something will be taken away from the experience. I'm just saying that... I have no idea what I'm saying. Is it that the quote is depressing but maybe just a little bit beautiful too? Let's go with that. I think that generally sums up how I feel about the book.

Cameron's typically an adult novelist, and to an extent, you can tell, in this, his first novel for teens. I'm not saying that it's dull or dense*, there's just a different sensibility. Perhaps less joie de vivre that really keeps teen books interesting to me. This said, Someday This Pain is quite wonderful; it's another title that pushes the boundaries of teen lit.

James is spending the summer before college (which he doesn't really want to attend) working in his mother's art gallery. She's engrossed in her new romance and doesn't pay him much attention. His job is boring and he's left to ruminate on all the annoyances of life and to get himself into the kind of trouble only a drifting, idol, too-smart-for-his-own-good teen can get into.

I think what kept me from hating this as much as some is that I can see this young man; parts of James remind me of people I've known. He's cynical, arrogant, overly intelligent, but largely aimless and maybe a little bit unloved and undermedicated. He over analyzes, coming up with answers that aren't positive, and just generally dislikes people. He's gay, but barely out to even himself, and maybe the repression of that, combined with his family and his depression lead to his rather despicable behavior. He his not your friend. He doesn't want to be your friend. You will not like James. But that isn't the point. It's a character-driven story. It's all about character, and maybe, just maybe, he'll gain a little empathy and understanding by the end of the book.

"The main problem was I don't like people in general and people my age in particular, and people my age are the ones who go to college. I would consider going to college if it were a college of older people. I'm not a sociopath or freak (although I don't suppose people who are sociopaths or freaks self-identify as such); I just don't enjoy being with people. People, at least in my experience, rarely say anything interesting to each other. They always talk about their lives and they don't have very interesting lives. So I get impatient. For some reason I think you should only say something if it's interesting or absolutely has to be said. I had never really been aware of how difficult these feelings made things for me until an experience I had this spring. A horrible experience" (p 39).

Another little bit that struck me, on page 192:

"I knew she wanted to help me. I knew she was my mother and loved me and I didn't want to be mean, or I didn't think I wanted to be mean, but there was something else inside me, something hard and stubborn that was mean. It just bugged me that she thought if I was gay she could do something to help, like give me a Band-Aid or something. And besides, being gay is perfectly cool these days, so why should I need help? And what help could my mother, whose third marriage only lasted a matter of days, be? I knew I was gay, but I had never done anything gay and I didn't know if I ever would. I couldn't imagine it, I couldn't imagine doing anything intimate and sexual with another person, I could barely talk to other people, so how was I supposed to have sex with them? So I was only theoretically, potentially homosexual."

There's a detachment James feels to the world, that you can't but help feeling as a reader. He sees the world in a sort of black and white that only teenagers can really embrace. What tips the scales in James' favor is his relationship with his grandmother. It is there that you see compasion, and it is there that you find that a lot of what James claims to feel is a facade. He just doesn't really know how to deal with real life, and covers it up with something just short of bravado. Of course, this being literature, you already know the fate of dear old grams, and the predictability of that is a little annoying. However, the strength of that relationship allows you to forgive it - simply because it is in her presence that James is redeemed.

Other Bloggers Say:
Bookshelves of Doom
Swarm of Beasts
Worth the Trip
Becky's Book Reviews

*Don't you just love that's what I equate adult novels to? Dull and dense? That's actually the tactful version. I'm aware they aren't all that way, but still...I'd rather read YA.
Posted by Jackie Parker at 11:44 PM

I just have to love that assessment. :)

I'd rather read YA, too. Why must "adult" novelists use so much bad language? This book doesn't look too appealing, but it is February, and all of my students want depressing books, so maybe I'll just glance through it.

This one sounds interesting, but it's always so hard for me to get through books written from the viewpoint of a character I don't like. Call me superficial...