So they made a movie of that book? You might have heard of it? Twilight? 'Sbout vampires or some such. I hear it's pretty popular. 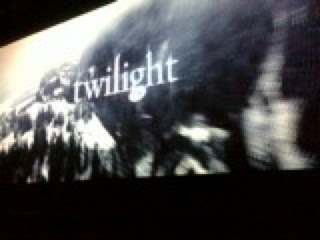 Right so, I have a few friends who were really excited to see the movie, so we went to the Midnight Showing, da dum dum. Can we say packed? Holy moly with the girls everywhere! Giggling, screaming. What a scene. My grouping was made up of 3 librarians, one wannabe librarian, one reading teacher and brother, all of varying degrees of interest in the whole thing.

I'm not sure how much you'll get out of the movie if you haven't read the book. My mind kept filling in the long mood shots with what all wasn't being said. It was an interesting audience to be in; I can't quite tell if they were just having a ton of fun with it and not taking it too seriously, or if they actually were an incredibly cynical bunch, or if all the laughter was genuine, and in fact, intended by the filmakers. Because, I'll be honest - we all laughed far more often than any of us anticipated. It was genuinely campy in parts. Not at all a direction I was expecting. So ultimately it was an odd mix of angsty melodrama, camp, and action. Every time a main character was introduced there was laughing - not giggling, or tittering, but actual laughter. Especially for Jasper (which I have to believe was intended - we all concluded afterward that he was very Johnny Depp/Edward Scissorhands-y) and Carlisle (not sure why there). Edward, of course, got some screams. It was odd.

Otherwise, I think it was pretty much as you'd expect. Some changes, but mostly quite honest to the book. Yes, Edward sparkled, though it was weird looking and reminded me of the kind of glitter you find on greeting cards that DOESN'T rub off on everything. You'll probably like the movie however much you like the books.

Washington looked beeeaaautiful though. Definitely inspires me to get back out to the peninsula one of these days.
Posted by Jackie Parker at 3:33 AM

Email ThisBlogThis!Share to TwitterShare to FacebookShare to Pinterest
Labels: movies

Dawn of the Read said...

I should have joined you...I ended up dozing off early watching a DVD and then waking up from like 10:30-2am anyways. Power of suggestion? Bah.

That sounds like an Experience. Sometimes going to movies that are packed is so fun -- a group experience that's almost cathartic. Other times, I prefer the near-empty theater of the matinee...

I'm SO amused this was campy. I mean, it thoroughly lends itself to that (hello? A man/boy who glitters?) but I giggle that it was that odd.

There's a group of us from school going on Monday afternoon. We can hardly wait. I'm not sure I agree with the casting of characters...not what I would have thought, but they didn't ask me.

Olympic National Park and the Hoh Rain Forest are mind-blowing. If make it to Seattle in the spring we should definitely day trip it.

They were laughing in our midnight theater, too, Jackie! Cheesy was the word batted around afterward in our group.

I appreciated plot points being filled in. But the close-up long looks just killed me.