In 2006, the young adult novel Nick & Norah's Infinite Playlist by Rachel Cohn and David Levithan quickly became a bestseller. Right away, it won the hearts of readers, then won literary praise and honors, including the first-ever Cybils Award for YA Fiction. Jackie and I (Little Willow) served on the Cybils YA panel that inaugural year, and will do so again this year (have you nominated yet?). Now that Nick & Norah has been selected to be the book of the month at readergirlz, it has given us another excuse to talk about this fast-paced story. (Come back next week to find out what each of us thought about the movie.) We had fun collaborating on this piece. We hope you'll enjoy the ride. Time to turn up the Playlist.

Little Willow: Nick, maybe. Like Nick, I write songs (but my music is unlike his) and I'm against drinking or doing anything that would harm my body or alter my awareness. Like Norah, I want to have full control over my life and my decisions.

Jackie: You know, I've been thinking about this question for awhile now, and I don't know the answer. I think maybe Nick, just because he seemed more awkward and unsure of himself, which is definitely something I can identify with.


Have you ever taken an impulsive trip to or through a big city?

Little Willow: I can't say that I have. I don't have an impulsive bone in my body! This book let me travel through a night in New York, somewhere I've never been. (Someday, Broadway! You're gonna hear from me!)

Jackie: OOO. One of the BEST road trips I've had was with my best friend in high school and college. We just got in the car and drove east. No destination. No reservations. No expectations. Some camping gear and maps. I think I have more crazy memories from that one trip than many other trips combined. We started in Grand Rapids, MI and ended up in Boston, but didn't really spend any time there before we had to come back. We also hit Albany, Toronto, Niagra Falls, and Quebec (which was very disarming). Not in that order, though. All in one week. It was fantastic. I should plan LESS, now that I reminded about how impulsive that was.

What was your favorite part of the book? Jackie: Well, I've thought a lot about Borscht since reading the novel. Haven't broken down and had it yet. I blame my childhood horror of beets.

Little Willow: I have never had borscht, though I like beets. I bought a can of shoestring beets today, in fact.

Jackie: I'm less afraid of beets these days. Especially the non-red ones I see at the farmer's markets.

Little Willow: Seriously, though, my favorite moments include . . . . . the Absolution of Nick, the consideration and explanation of tikkun olam, the rain, and the very end.

Jackie: My most vivid memory of the book is of the ice machine scene, but overall my FAVORITE is simply the sense of how amazing, unexpected, and life-altering one night can be. I think it is actually the contemplative moments near the end that really capture that. It was so well done.

Have you read any other books by Cohn or Levithan?

Jackie: I've read their other collaboration, Naomi & Ely's No Kiss List (which didn't quite live up to the admittedly high bar of N&N). I've also read Cohn's Cupcake and You Know Where to Find Me. I've been meaning to read more Levithan for ages, but haven't managed to get around to it, so I've only read the modern classic that is Boy Meets Boy. I know that I'd love them all, but, well, time. Sigh.

Little Willow: I know that you have a huge stack of books to read, Jac, but I hope that you'll add more books by these authors to the top of that pile. If you liked Cupcake, then you simply must read Shrimp and Gingerbread, the other two books in the CC trilogy by Rachel Cohn. I've read all of their individual novels plus their two collaborative novels. Rachel's books feel real. David's writing has this amazing poetic quality, and he tends to employ very thoughtful narrators. Levithan has also contributed to or edited a number of anthologies.

Jackie: I really want to read Wide Awake and Marley's Ghost, but I just haven't picked them up. I want to see Cohn do a graphic novel. Of course now that MINX is gone (boo! hiss! you didn't give the line enough time DC!), that seems less likely.

Little Willow: Oh, I would love to see what she would write for a graphic novel! Have you seen David's contribution in the anthology First Kiss (Then Tell)?

Jackie: No. I tend to avoid things with Kiss actually in the title. Also, not a huge anthology or short story reader. I'm always disappointed I can't spend more time with the characters I love so quickly in short stories, so I avoid the inevitable pain.

Little Willow: Tell is fun, and it has a lot of authors you know and love . . . Nudge, nudge.

Do you have any personal anthems?

Little Willow: Since I'm the music-obsessed person who put forth that question, let me tell you how I define personal anthems: favorite songs that capture something that happened to me or something important about me. One of my personal anthems is "The Middle" by Jimmy Eat World, which conveys my optimism and patience:

Jackie: When I drove across country, alone, to move to a new city where I knew no one, I had most of my friends and family create mixed CDs for me to listen to on the way out. I found my personal anthem for that period of my life in the first mixed CD I listened to. It's "Extraordinary Machine" by Fiona Apple:

If there was a better way to go then it would find me
I can't help it, the road just rolls out behind me
Be kind to me, or treat me mean
I'll make the most of it, I'm an extraordinary machine

I'm seeing some similarities between your song and mine, LW.

If you had to create a playlist that captured the feeling and events of 2008 so far, would you know what to put on it? Name one of the songs you'd use. 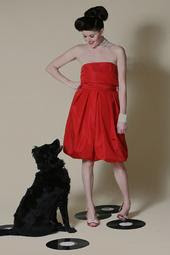 - "Wow and Flutter" by April Smith because there has been a lot of personal change for me this year, and I think there's something in Smith's lyrics that reflects all those changes. Plus, it's just totally fun to listen to.

- Ingrid Michaelson. Not one song. All of them. Every last one of them means something to me this year.

Apparently, I've got something for singer/songwriter chicks from NYC. Huh. I wonder what that says. At least that part matches the book some... *Jackie grins*

Little Willow: I like making playlists. I made one for Nick and Norah's Infinite Playlist, in fact. For my personal 2008 playlist, I might select "Too Much To Live For" by Lucy Woodward.

N&N is definitely for older teens. Have you seen or heard any opposition to the book? Does it make you cautious when recommending it?

Jackie: I honestly haven't had any personal, real life, objections to the book, but I've heard a lot of complaining online about the language. Since I swore a lot when I was N&N's age, I can't say that I'm really one to criticize on that front. It isn't a book I'd give to just anyone though. I'd really have to have a feel for them. This is, of course, if the book was ever on the shelf, which it hasn't been since the movie trailer started to play.

Little Willow: I don't swear. I'm not kidding when I say that I live a G-rated life. N&N is no less than PG-13. Due to language and certain situations and scenes, I tend it give N&N to people over, say, 15 years of age. I haven't had any customers respond negatively to it after reading it. I've had some good chats with readers about this book. In fact, I now know of at least four different teens that have become Levithan followers. We passed around How They Met earlier this year and discussed that as well.

How do you feel about the new cover for the paperback? It's a lot different from the original?

Jackie: I'm pretty "meh" about it. I think way fewer guys will pick it up now with that heart on it. And that's a shame.

Little Willow: I like both covers. I think the first one is more gender-neutral and suited to the punk-rock blurred-night fast-happenings feel of the book. However, I love purple and I love cityscapes, so I really like the look of the paperback cover. The movie cover is cute, too. I wish that the flyers and posters had the proper name beside the proper person! Michael's name is beside Kat, and Kat's name is beside Michael. Speaking of which... 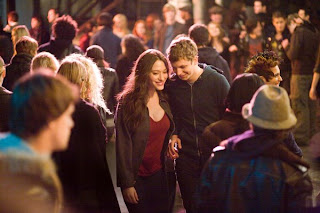 Do you plan on seeing the movie? How do you think the movie will compare to the book?

Jackie: I'm so there. I'm braced for significant change, but I'm hoping since it's been some time since I've read the book that it will simply be true to the SPIRIT of the novel. That'll probably be good enough for me. What I fear is that all the best parts are in the preview, and that there's nothing else to see...

Little Willow: I saw a screening towards the end of September. I knew in advance some of the things that had been changed - the trailers and casting gave some of that way - but I don't want to spoil anything for you. Would you like to talk about the movie after you've seen it and compare it to the book?

Tune in next week for our reactions to the film version of Nick & Norah's Infinite Playlist. Prepare yourself for spoilers, applause, and other stuff.

Nick & Norah featured in the October 2008 issue of ReaderGirlz

I'll think of you when I crack open that can of beets.

Maybe that can be the sequel title: Nick & Norah: And The Beet-Beat Goes On.

Excellent roundtable, you two! I can't wait to chat with her later this month.

*groan and shakes head at LW*

1. Borscht is VILE. Can not stand it.

2. "Wide Awake" is the awesome, Jackie. You're going to love it.

I have come to know more about the mysterious Jackie, which is why I say...tag!
http://brimstonesoup.blogspot.com