You know, I seem to recall that Eighth Grade DOES Bite.

Gina at First Second Books emailed me a couple months ago asking if I'd like to rebel with them against the sweet flower-filled month of May and post about a vampire books. Any vampire-related material I wanted. Now, I'm drowning. I've got so much on my plate, then and now, that I'm barely able to get through the day. I'd been saying no (or ignoring, or worse, forgetting) things that came my way for weeks. And I continue to do so. Simply out of self-preservation. But. Gina's email was really good. She made me laugh. She wasn't trying to sell me on something or really even the two vamp graphic novels her house has out this month. She approached me with humor and candor, without expecting anything - or being puffed up with self-importance. She did it right. And I said yes. Let's not talk about the fact that I said I'd post yesterday. 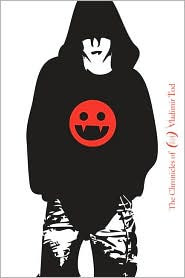 I searched around a bit looking for a vampire book I wanted to read - there's no shortage of them these days. I landed on Eighth Grade Bites: The Chronicles of Vladimir Tod by Heather Brewer. Mostly, ok, not mostly. It was pretty much the awesome cover that got me to read this one. I didn't really look into it any further once I saw the cover.
Vlad's different. He's always been different. When he gets hungry or angry he grows fangs. He can eat anything, but the only thing that actually sustains him is blood. Luckily, his aunt is a nurse and has access to the blood bank. Even among vampires (not that he's met any) he's a bit different. You see, his dad was a vampire, but his mom was human, so all the lore doesn't quite match up to his reality. Normal adolescence is hard, but when you've got powers you don't know what to do with? Yeah. When people start to disappear, and strange people show up in his little town, Vlad starts to look closer at himself - and his parent's deaths three years before. Hopefully, he'll learn enough to keep himself safe.
It's a light, quick read. Which is actually odd, since several people die. One death in particular is a little on the gruesome, unsettling side. I'm ambivalent about the book. I won't have a problem recommending it, but it's not a must read. I don't feel that there was any significant character development beyond exactly what you'd expect for Vlad. The supporting cast didn't have any dimension. I was especially disappointed with Vlad's best friend. Henry was interesting and dynamic, but there wasn't anything behind it, and his role at the end of the book was disappointing. It is however littered with amusing lines:
"Girls like Meredith Brookstone didn't date boys like Vladimir Tod. Besides, the hickeys would be a nightmare" p 15.
"'Hey Henry?' 'Yeah?' 'I'm sorry about biting you when we were eight.' 'No problem. Just stay away from the cat or Mom with throw a fit"' p 133.
The sequel, Ninth Grade Slays just came out.
Get Vampire Month stuff here and check out the :01 blog for the updates.
Posted by Jackie Parker at 1:45 PM

You're seriously only going to read vampire books through the entire month of May?! You go, girl. More power to you. And you're right. That cover reeks of awesomeness.

No. I'm not reading only vampire books. Well, I might read a couple more. But not only.

I love the cover of the sequel, to. Ninth Grade Slays! Yes, it does. And it bit, too. And also possibly sucked...