In a move that represents a longing for more Potter...

Harry Potter is over. There are no more books. In the gaping hole that leaves in my heart, a hole felt most acutely on Monday when I finished Deathly Hallows, I was at a loss as to what to do next. Days later, I'm still processing all that happened, still talking about the events of the novel, still feeling tears well upon the discussion of the demise and triumphs of certain characters. But this girl's still got to read. I wanted to just start over and read it again, but I promised to loan my copy to a co-worker, and I couldn't withhold Harry Potter. That's just mean. BUT WHAT TO READ NEXT? What can possibly compare? What can shine through the shadow that Harry casts? It's hardly fair to the next book. I found myself in a quandary. 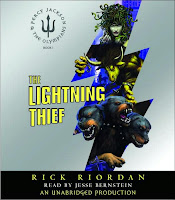 The deciding factor? A want to hold onto the magic of Harry Potter just a little longer, the fact I kept giving this book to kids and hadn't read it, and a wait list on the copy I'd finally gotten of The Lightning Thief. On the surface they do share striking similarities - a young boy suddenly finds out that the world he thought he knew is a far different place, and he, himself, will play a very important part in its future because of powers he never realized he had. And then he'll go to a place when others like him learn to hone their craft before setting out on an adventure he alone (with the help of a couple friends; one very smart girl and a boy who is helpful, if slightly accident prone) can succeed at. Did I mention there's a three headed dog? Or that this is the first in a series? Yep. Sounds like Harry Potter.

However, since Riordan has centered his tale around the idea that the Greek Gods of yore are still going strong and affecting the lives of mortals. What boy (or girl) in Percy Jackson's situation wouldn't want to suddenly find out that their absent father is a Greek God, that his dyslexia is because he's hardwired to read Ancient Greek and his ADHD is actually something that will keep him alive on a battlefield? That after all this time as a social outcast, after all the school expulsions, Percy has finally found a place to fit in. Even if he is just a bit more important than the other kids. Not that our dear hero realizes this, of course. I love that Percy's got dyslexia and ADHD. It just SCREAMS to be read aloud in a classroom. Right alongside a unit in mythology. It's funny and the kids will be enthralled from the first page.

It's also very plot driven and readable, if largely predictable to anyone who learned any mythology in high school (ok, it was largely predictable to me based on my Honors English 9 coursework, but now, because of Riordan, I've finally got the difference between Charon and Chiron DOWN. Woo! Always something to learn!), and fits perfectly with the typical mythology hero quest format. That's set in modern day, for just a bit more fun.

But, since I'm like the last person to read this book, you already know all this!
Posted by Jackie Parker at 6:25 PM

Don't tell anyone, but I'm actually the last person to read Percy Jackson...

Um, actually? I think I may be the last person... Shhh!

Don't worry -- you're not the last person to read this book. I've checked it out twice and STILL haven't gotten around to it!

*watches Tanita and Sarah battle it out*

It's a fun series so far.