Not in MY library 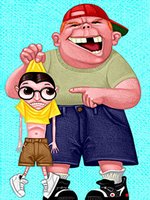 I don't ask a whole lot. Pretty much, if you come into the library, and you don't want anything from me, I'm going to leave you alone. In fact, if you ignore me, there's a good chance I'll ignore you. If you don't draw attention to yourself, I may, *gasp* not even notice you. I know! It's surprising to me, too. But I don't care what you do. I'm glad that you are in the library, and I'm glad that you know we exist. You don't have to whisper, I'm not going to tell you to be quiet unless other patrons start to look askance at you.

However, if you are one of the very few people who do cross that thick line, in my experience, all that need be said is "hey, you are starting to disturb other patrons, so keep it to a dull roar, eh?" Again, YOU CAN DO WHATEVER, JUST DON'T BUG OTHER PEOPLE. My cousin's husband Tim (also a librarian, we are two of four librarians in this family. Yes, my dork lineage is pedigree.), manages a library that is far more urban than any I've worked in. I've been treated on many occasions to the stories of his madcap urban work existence. Because of these funny-if-you-didn't-have-to-take-care-of-them stories, I had girded myself for the man who would pee on the stacks and to the fact that one day I would have to call the cops on a patron. My only shortcoming was that I never quite anticipated the call wouldn't be over a drunk, but a 9-year-old. *sigh*

It started off fairly innocent. Some loud, startling noises from the children's section. I ignored them for a while, but they just kept getting worse, and the patrons were beginning to glare. So, up I go and find two young boys, "innocently" reading. I'm not buying it, 'cause it's 7pm and there's nobody else on that side of the library. I might be a tad naive at times, but I'm not a moron (Eric even said so today. In fact he said that I was "intelligent beyond my years." Either it was sarcasm or he sucks up REALLY well. I'm choosing to believe the latter, but probably it was a little of both...). I ask them to keep it down, the one boy continues and stuff gets thrown around and I tell the kid that it's time for him to go home.

Things then escalate to the point where the kid becomes defiant and won't leave the library. I call his father (completely pointless move, I might add) and tell the kid he can't come back for two weeks. He of course, knows that there isn't anything more I can do short of calling the cops so he's in and out of the library for the rest of the night creating loud distractions, in various guises. Eventually, we close. The next day here he is again. I don't even bother to talk to the kid. He knows and his father knows that he's not allowed back and at this point he's trespassing. I called the deputy, 'cause I'm not putting up with it again. In between the time of my call and the deputy arriving this kid has verbally insulted, physically threatened and actually punched other kids. I don't feel bad about calling the cops, but I wondered what, if anything, I could have done that would have prevented this from reaching such extremities. Should I have ignored him to the detriment of the other patrons the first night? Had I not called the cops would he have beat on smaller kids? I can't touch the kid, according to our policy, so how do I get him out, if the parents aren't present, participating or, well, care? I didn't know this kid from Adam, but apparently, he had just gotten off a year-long ban from the library. He's 9! Here's another year. I'd forgive him for the disruptiveness, but not the bullying. Not in my library. I hate it when I'm in charge...

Anyway, advice and thoughts are appreciated.
Posted by Jackie Parker at 9:26 PM

Wow, a bully at the library, I thought I'd never seen the day. I know it's agains library policy, but I would have repeatedly smacked the kid in the back of the head and told him to get the fudge out. Don't you just hate company "policy."

Obviously there isn't a whole lot of parenting going on in this kid's life, which is sad. Had you seen him in the library before, or was this the first time?

He had just returned from a year long ban for a previous infraction that I don't know the details to.

You did the right thing -- you know you did. It just sucks sometimes that you have to make these decisions.