Ghostly Beans and Ghastly Water. Or maybe it's the other way around. 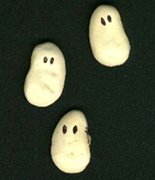 This post is for James. Jamie. Wode. Whatever. I hope it's random and disjointed enough for you.

On Friday I managed to burn myself twice. Hours apart. Doing different things. In the same place. The first time was at work with the haunted hot water tap. It's supposed to, with the turn of a knob, spew out water heated to 190 degrees. I dropped my mug while filling it. Ouch. Later, while toasting the bread for bruschetta (yum) there was an incident with the baking sheet. It only hurts until the pain goes away, and the blister doesn't interfere with anything...

I'm guessing that you picked up on the 'haunted water tap" bit. I was sitting on break, minding my own business, reading Confessions of a Teenage Sleuth: A Parody, when all of a sudden, across the room the tap starts to spurt, sputter and spit, gradually gushing water without reason until it's a steady stream of steaming fluid flowing on its own. There was no visible presence there to twist and hold the knob as normally required. Clearly there was some sort of invisible specter. Or some engineering quirk. Either way, it's all mysterious to me. (By the way - I totally dig alliteration!)

About a week ago, I made a black bean soup. It was horrible. I'm sure someone would have liked it, but that someone wasn't me. I used all the right ingredients, but it just didn't taste good. So, I was stuck with a vat of disgusting chunky liquid. I don't have a garbage disposal, so I was at a loss for what to do with the mess. I couldn't throw it down the sink as it was too lumpy, nor could I throw it in the trash because it's soup and therefore, mostly liquid. While talking to Angela, all the way in London, she came up with the amazing idea to flush it down the toilet. You do see where this is going, don't you? Well, yes. Although I tried not to overwhelm the toilet... Good thing I had a plunger. My bathroom smells of garlic and spice. It's not unpleasant, though inappropriate for the space.

On an unrelated note, the new Volkswagen commercials with the German engineering focus totally creep me out. More than the haunted water tap.
Posted by Jackie Parker at 1:01 PM

lmao!!! I can't believe you actually flushed it down the toilet. Next time try draining the liquid into the sink and tossing the "chunky" part in the trash. Or you can put it in a ziplock bag and throw it directly into the large trash receptical that I'm sure is somewhere on the apartment grounds. Speaking of grounds, you could've tossed it over the balcony. Oh the number of possibilities are boundless!

Oh my freaking goodness I can't believe Ange told you to put it down the toilet. I don't think I've laughed this hard all week. I can just see her telling you to do this, and you thinking, "Yeah, great idea..." and then actually doing it, then getting this horrified look on your face when it didn't flush and instantly panicking and grabbing the plunger. And for some reason, I picture you all contorted in very uncomfortable positions while trying desperately not to make your toilet explode. Definately the best story to date.

I've done this successfully dozens of times because I had a clog-prone drain and I hate having food in the trash. The key to happy food flushing is to do it in small quantities. Another way to get rid of unwanted soup/stew/other liquidy nastiness is to freeze it, and then put it in the trash the morning you take it out.

I think that we are going to have to wrap you in bubble wrap. Maybe it will prevent you from burning yourself. Hey, with your bathroom, there are worse smells.

That's what you get for making black bean soup. Stick to the stuff you know how to make...like macaroni & cheese. HA HA HA!!

P.S. Visit Backwardsbush.com. Meg enjoyed it so much, she got the keychain (instead of the shirt)!! You'll appreciate it!!

James - If I were to be encased in bubble wrap and then burn myself (assuming I had the ability to move) what would happen? Right, the plastic would then melt to my skin, probably fusing to it which would then cause me to die. Painfully. Thanks for your concern, lots of love, Jac. ;) lol

Josh - I went to backwardsbush.com and downloaded the widget. Thanks, much for the info, it was hilarious.

Beth - didn't have any ziplocks that were meant for anything bigger than a sandwich. Thought about dumping it over the deck, but my luck the supers would see me and get upset. I just bought a strainer, so the whole "drain the liquid" approach will probably be applied in the future. Although, really, the whole toliet thing in theory should work v. well. It's just when you throw me into the picture that things go a bit awry.

why didn't you just SAVE THE SOUP??? EVeryone KNOWS that black bean soup tastes better the NEXT DAY!!! smothered with sour cream or yog or cheese and of course delightful GREEN FLECKS of cilantro.

This soup was NOT good enough to save, Cheri, I assure you.

Who wouldn't want to have ze Germans un-pimp your auto yah?