Aneurysms and Death by Shooting 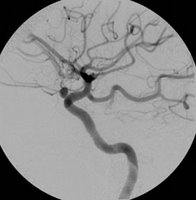 My air mattress has an aneurysm. Yes, I've been sleeping on an air mattress since I left. I don't want to hear it. I topped it off with air while I washed the sheets and when making it up again I noticed a rather unusual lump about where my knee would hit on the right side of the bed. Thinking that I simply make beds lousily (which is true) I went to smooth out the area, finding aforementioned aneurysm. I am now afraid to go to sleep for the fear that the aneurysm will do as aneurysms do, and blow. Taking me with it, of course. Either I will be taken out by flying plastic or suffocate slowly from the excess. Really, I just dread being bed-less. It would happen just as I'm about to have my first visitor. It is clearly my fate.

Actually, last week I took a 'How Will You Die' quiz. I am most likely to die of natural causes, but second most likely to die by shooting. Last week I couldn't fathom how I would die by shooting. Yesterday, I told one of our perverts that he probably shouldn't look at those websites as he was offending the weak of heart. I'm beginning to understand how gunshots might be in my future. Unless by 'shooting' they meant being photographed or vaccinated to death...

Mom will be here in approximately 10 hours!

PS - Tell me how you are going to die (I so know that you all will take that quiz - it's only fair that you tell me! Think of it as a fee for the 3 minutes of amusement I provided with the link ;).
Posted by Jackie Parker at 1:07 AM

That's funny, I got the exact same answers. It can't be right, though, because I'm obviously most likely to choke on a piece of tofu.

You scored as Natural Causes.

Your death will be by natural causes, though not by any disease, because that is another option on this test. You will probably just silently pass away in the night from old age, and people you love won't realize until the next morning, when you are all purple and cold and icky. So be happy, you won't be murdered.

Apparently poision or just disappearing (I do tend to wander...) will be my undoing.

I don't want to see anyone eyeballing my food from now on :)

um. apparently i'm likely to "posion" (sic) myself. if i don't succeed on that front, i've got the natural causes to look forward to.

thanks for a depressing time. i've got to eat something to cheer myself up. do you think it's okay that this can of spagettios is bulging at the seams?

I hope no one here is a canibal 'cause I will most likely die by being eaten. I'm in shock.

You scored as Bomb.

Your death will be by bombing. You will probably be an innocent bystander, not doing anything wrong and not a person who was targeted at, just in the wrong place at the wrong time.

I had to answer a tie breaking question. That kind of sucks, kind of hoping I would go in my sleep. Hey there is still a shot (no pun intended).

Dan: Although, really I still consider bombing death as murder. Just don't take a government job or deal with money.

Vin: Don't most men get poisoned by their wives? Or am I confusing real life with House again?

Cheri: Just stay away from the Spagettio's. Trust me. Besides, there's probably beef products in there somewhere.

Beth: Oh dear. How on earth did you answer those questions?

James: Well, you are a civil servant. Sorry 'bout that. ;)

You scored as Bomb.

Your death will be by bombing. You will probably be an innocent bystander, not doing anything wrong and not a person who was targeted at, just in the wrong place at the wrong time.

You scored as Posion.

Your death will be by poison, probably because you are a glutton and are around so many people that it would be easy to get away with it. Several important people in history share your fate.

There...another poison victim...I think it was because I couldn't tell the difference between the coral snake and the milk snake...