Love is the Higher Law 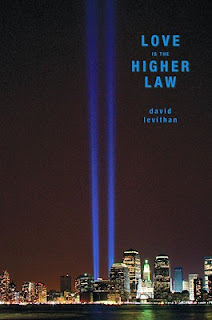 Some of you know that I take notes, of varying depth, while I read. Sometimes it's just notes on plot and character. Sometimes the notes consist of sentences that strike me as emblematic of the novel as a whole or are just beautifully written. In LOVE IS THE HIGHER LAW I took no notes on plot. I did however manage to copy out ONE WHOLE PAGE of the text into my notebook. I thought it would just be a couple sentences, but it ended up being pretty much the whole page (page 39, if you were wondering).

Anyway, I didn't read this because the eighth anniversary of 9/11 was coming up. I don't really need to relive that day - ever - I haven't read or watched anything dealing with the subject prior to this. I read it because it was David Levithan writing about 9/11. I know that Levithan is a New Yorker. And I trusted him as an author to deal with this subject with barefaced honesty, never pandering, never with any sense of self-importance or false heroism, or anything else that sullies that day.

Love is the Higher Law follows three teenage New Yorkers through September 11, 2001 and beyond that to the marvel of living on. It follows how one day has lingering effects on their lives and what it meant to be a New Yorker, and a human, on that day.

It was beautiful from the first page. Each of the three voices were distinct and unique.

Claire started out the morning of 9/11 paranoid and worried over the what-ifs in life. It took a what-if she never expected to realize what life - and love - is.

Jasper began that day self-absorbed and self-important and deals with it by pushing everyone away.

Peter sees the world through the goggles of the truly music-obsessed, but is at a loss when the world drowns out his music.

These three teens who barely know each other before these events somehow eventually find each other in a masterful and utterly believable weaving of storyline. High school and college typically see teens grow and change, but those who came of age during this period had their transition sparked by one shared event, which makes them unique among recent generations. Levithan explores this thought with sensitivity.

Yes, I'm raving. And nominating it for my library's Mock Printz.

Here are some quotes:

Peter, p 39: "I know if I press play, the song will never be able to work for me again, because instead of the song playing under the moment, the moment will weigh on top of the song, and I am never going to want to remember this, I am never going to want to be here again, so I walk withougt anyone else's words in my ears, and all the music falls away from the world, because how can you have music on a day like today? Whitenoise is not the same as silence. White noise is different because you know white noise is deliberate, composed to cancel everything out. It is the opposite of music, and it is all that I can hear and all that I can imagine hearing right now. I keep going back to that first moment - seeing that black hole on the tower, seeing the site of the crash, that image, that one image is what I am picturing right now. That tower is our history, our lives, all the minutiae and security and hope. And that black hole is what I'm feeling. It will effect me in ways I can't even begin to get my mind around. This day is a dark crater. There is no room for songs. The songs are wrong. Every song is wrong. And I don't know what to do without music."

Claire, p 106: "I think that if you were somehow able to measure the weight of human kindness it would have weighed more on 9/11 than it ever had. On 9/11, all the hatred and murder could not compare with the weight of love, of bravery, of caring. I have to believe that. I honestly believe that. I think we saw the way humanity works on that day, and while some of it was horrifying, so much of it was good."

Great minds, I reviewed this one today, too. Kind of a tough read, in some ways; in others, it was handled with care - those kid gloves you expect from D. Levithan.

I will definitely pick this up, now.