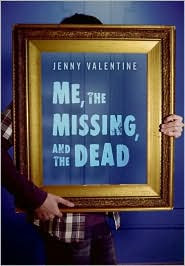 Seems an apt title for the first review after a long absence, doesn't it? It's also the title to the Morris Finalist by Jenny Valentine. I read it quite some time ago (last Spring? Summer?), but it just shouted out at me from the bookshelf and, finding I had taken copious notes, I agreed to review.

Of course, that all is probably the vicodin talking. But nevertheless.

(hmm. That's a long title, isn't it. Let's be more familiar and call it MMD. We'll pretend that doesn't sound like a vaccine) is a quiet, unassuming novel with a clever, but equally unassuming cover. It is also obviously British from the very first sentence - instantly evoking place within a few words.

Lucas is a drifting, introspective young man who idealizes his father - his father who's been missing for most of his life. He's always hoped to find him, but it isn't until one day, when he walks into the office of a taxi business that he starts his true search. Why there? Because it is there he meets Violet - or, we should say, the urn containing Violet's ashes. She knows something about his father. And weirdly, Violet is talking to him.

There are a few oddities about this book - one of which is that as a reader you go back and forth between wondering if Violet is really talking to him or not. Another is its sorta odd ending. But that, you should discover on your own, and here's why:

While the plot starts off slow, momentum is gained when the grandparents (of all characters. Is it just me, or is there a prevalence of spunky/cool grandparents in kid lit these days?) enter the scene. They are quirky and full of amusing thoughts, like:

"Pansy [the grandmother] hated it in the hospital. She said an airless room full of ill people was like dying in Tupperware" p 95.

Valentine does something fairly restrictive in her storytelling technique - she shies away from actual dialog in most instances. Rather than have a scene of he said she said, we get something like p 144:

"Martha said maybe I was clinging on to all Dad's stuff because I didn't have enough good memories of him to fill the spaces."

Let's forget that the obvious choice would to actually have a scene where that's revealed between Lucas and his love interest; instead, we are forced to deal with one perspective beyond the normal level for a first person perspective novel. There is certainly still dialog, but the tactic lends a general tightness to the writing that fits the introspection of the character and the plot, as what was said doesn't matter so much as how Lucas interpreted it. Actual dialog scenes are then left for truly important or comic bits. By large.

MMD is a novel very much about identity and memory. And, of course, it is a bildungsroman, but then, most of YA is. Lucas is going in search for his father, and on the way has to challenge how he sees him, how everyone around him sees him and try, maybe, to see him without any bias or expectations.

"And come to think of it, how well does anyone know their own mum and dad? I'm only just beginning to learn. You start off thinking they own the world, and everything is downhill from there. Parents do so many things to wake you up to the idea that they are less than perfect" p 89.

"How many versions of Dad are we all missing, me and Mercy and Bob and Norman and Mum and Pansy? A different one for each of us and not one of them is real" p 94.

It occurs to me that there are loads of stories with this basic plot: kid figures out that X person is not who s/he thought X was, and in the process finds his/herself. Paper Towns. White Darkness. Ok, naming two doesn't amount to loads, but I'm on vicodin. I'm sure you can come up with a few more. You're clever. Either way, it's interesting (to me) that I keep seeing this plot pop up, and yet I'm not tired of it. I wonder if it's just our general anticipation that people, someone, will inevitably let us down.

Ok, that's waaay too much crazy introspection from me.

There's also a lovely romance. With Martha. Who's got her own problems.

To sum up: Good book. Well written. Somber, but surprisingly funny. Quietly lingers in your mind without you realizing it had surreptitiously crept in. Give to teens who like to think.

I have to say, I'm surprised at myself that of all the books I could have reviewed, this is the one that caught my eye and made me sit down to write.
Posted by Jackie Parker at 5:11 AM

As usual, your reviews make me snort. And I'm not on Vicodon.

I've heard good things about this one. I should try and find it over here, huh...?

I liked this one too! Interesting point about the dialogue, or the "not dialogue". I'll have to keep an eye out for that in the future.

Tag! For the fabulous blog/addictions meme.

I love the lines you pulled out. I'm adding it to my read list.

Welcome back! In good form despite the meds, m'dear.

I enjoyed this book and I would love to read more by Ms. Valentine.

I thought this book was clever, well written, and with a surprise ending. It had elements of the supernatural (the protagonist gets the impetus to look into his father's disappearance as a result of finding an urn in a cab) and a twist of an ending. I recommend this to everyone who is looking for a good read.