I must admit, the wallpaper would be awesome. 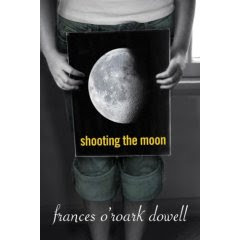 There is something quiet and wonderful about Shooting the Moon. The plot isn't earth-shattering or thrilling. There isn't non-stop action or gut-busting humor, but all the same it is compelling, endearing, and smart. It's timeless.

I haven't read any of Frances O'Roark Dowell's other work, despite the fact that my mother loves both Dovey Coe AND Chicken Boy (can we say unappealing cover on that one? yes? I don't care that there is both a chicken and a boy - or even chicken wire.). Shooting the Moon isn't a teen book - I'd say it's solidly in the 9-12 age range, thus marking it the youngest book I've read in ages. And I couldn't tell you what made me pick it up, but I certainly didn't want to put it down - not even when at dinner with friends as waiting for some of the best Indian food in the greater Seattle area. I even got a little misty at the end - convincing one of my friends, Jay (not a librarian, an important distinction since, let's face it, most of my friends are), that he needed to read the book. Which he did - and declared it wonderful, too.

Jamie Dexter loves the Army. The Colonel (her father) can do no wrong, and since his way is the Army way, Jamie wishes nothing more than to be able to go off and fight in the Vietnam war. Her big brother does just that - and therein lies the heart of the story. TJ enlists, against his parents' wishes. Jamie can't wait for his letters home, but when they arrive, she's disappointed by the boring tales he tells their parents - but that letter isn't for her. TJ doesn't write to Jamie - he sends her film, and with those visual tales, one roll after another, she slowly begins to realize that TJ just might be telling her more than he tells their parents, and that war might not be quite what she always thought it was.

It's off a sort that you know pretty much as you start the book what's going to happen. But it doesn't matter - Jaime and all of the people around her are entirely lovable. And the how matters far more than the what. The subtle reminder of the realities of war are certainly relevant to today's audience. They're well done without being a fierce anti-war indictment (as so many are).

I think it shares a tone with Pictures of Hollis Wood - more than just the cover, I should add, upon looking THAT up...hee. I'd also suspect that fans of Because of Winn-Dixie, and Olive's Ocean (although that skews a tad older) would love it.
Posted by Jackie Parker at 10:34 PM