Well, I suppose it's just expected.

My mom was complaining that I hadn't posted in 10 days. Since it's actually been 14 days...well. I suppose I should buckle down. It's been a busy fortnight for me. Lots of happenings. No, I'm not going to tell you. Right now, at least (ok fine, I'll give you a little).

Anyway, I've got a shelf of to-blog books that can't take another ounce of weight, but I suppose I should start with a title (and really, blogging this is boring to me, as EVERYONE at this point has done it...but, I'll cling to the novelty that I read it before most of them. Silver linings, people, do you want me to blog or not?) that I last told you I'd blog next (I might have said "tomorrow," but you won't hold it against me, right?). (Have you lost the thread of what I'm actually talking about after all of these parenthetical statements? Me too.) Remember what that was?

This year's Printz Award The White Darkness by Geraldine McCaughrean. I read the first page 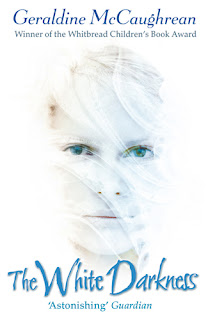 and was not only instantly riveted, but I had to share. The subject of my sharing isn't really one I've been able to engage in the material I read (He said he didn't think Holling Hoodhood was believable as an anti-hero and was thus unable to finish The Wednesday Wars. The only thing I've gotten him to finish was Mouse Guard, and if you are familiar with that, you know it's a graphic novel about warring mice.), but even he sat through the entire first chapter as read aloud by me, remarking that it was very good writing. Re-reading it now? Holy crap with the foreshadowing. Everything you need to know about this book is told to you in the first chapter. You just don't realize it at the time. Just so you know what I'm talking about, the handful of you to whom this is actually new material:

"I have been in love with Titus Oates for quite a while now - which is ridiculous, since he's been dead for ninety years. But look at it this way. In ninety years I'll be dead, too, and then the age difference won't matter.

Besides, he isn't dead inside my head. We talk about all kinds of things. From whether hair color can change spontaneously to whether friends are better than family, and the best age for marrying: 14 or 125. Generally speaking, he knows more than I do, but on that particular subject we are even. He wasn't married - at least, he wasn't when he died, which must have substantially cut down on his chances" p 1.
You want to read it now, don't you? Give in. It's totally worth it. I don't know if there's any point in trying to review this one, so I think I'll just share stuff that struck me enough for me to make a note while I was reading. SO:
"For some crime committed by my ancestors in the dark and forgotten days, I came into the world already tarred and feathered. With shyness. It hurts terribly - every bit as much as hot tar choking every pore - and I wish I could be rid of it. But it hurts a lot less than having someone try and peel the shyness off. That's like being flayed alive" p 56.

As someone who has been forced to karaoke when she doesn't want people to look at her, I can appreciate that sentiment.

On being dropped off in Antarctica and watching the plane leave them behind:

"It left behind a legacy of silence - immense and solid. The clamor of silence was so loud that it herded the other visitors into a nervous huddle, cowed. Didn't worry me! Me, I know silence. I knew all along it would be here, waiting. Me, I do silence" p 76.

"Titus never says anything that I don't, in my heart of hearts, already know" p116.

There are a few things that quote tells us. The most important being that while dear Sym believes so hard in what she tells us that we want to believe too, ultimately, she knows what we suspect. She's not dumb. She's just repressing. The reality of certain events in her life lend her to cope in unusual ways, but she knows the truth. She always has.

"We cupped our hands around our ears and turned to all four points of the compass, but the sound was filling the sky like a cloth soaking up blood. The whole hollow sky reverberated with engine noise" p 161.

That brutal little simile? It perfectly mirrors the danger they are in, and the lifesaving potential held in the sound of that engine. Oh, and it's beautiful and evocative and gruesome (like the next book I'll blog. The gruesome part, I mean.).

And the quote on page 325, but if I share that, then it will give away too much to discerning readers. Which, of course, you all are.

And the eponymous quote on page 328:

"What is passion for? It's for when the words run out. That's when to come down out of the nursery: when you can't see the stairs for the white, glaring darkness, but you don't care anymore if you fall. When there's nothing left between sky and earth or as far as the eye can see, except Need. It's like a blizzard unpicking flesh and bone and what's real and what's not..."

I've changed my mind. Blogging that wasn't boring. I appreciate the book even more, now that I've revisited it. Have you read it at this point? What did you think? Still smarting from the committee's omission of your favorite title?
Posted by Jackie Parker at 6:58 PM

I picked up this book on a whim, and then it was like it got superglued to my hand. I am SO GLAD that I did. I would have been Quelle Annoyed that I couldn't get it in the UK, so glad I just happened to pick it up in a random library grab before I left. It's SO very intense and literary and gorgeous and deep and I'm so, so, SO pleased it won.

AND I'm so glad you got to meet all of your Idols and Cool People AND Miss Erin who really does look like Christina Ricci. How cool is YOUR non-blogging life? All I'm doing is sloughing through revisions. *Mope* (Okay, can't truly mope about revisions, because they mean publishers may like me. Yay!)

Le sigh. I think I might be the only one in the Kidlitosphere who didn't like this book... Oh, I do appreciate the excellent writing. And I did identify with Symone about some things... but for most of the book I just wanted to shake her and make her stand up and DO something to fix all the stuff that was so obviously wrong... or at least NOTICE that things were NOT OKAY and that, in fact, things were VERY VERY BAD.

But every review I've read has been glowing, so I know I'm in the minority here... Just not my thing, I guess.

Thank you so much. I am just delighted that people are even reading it, let alone discussing it with their friends. I knew when I had finished it that it was odd and off-the-wall and lots of people wouldn't make anything of it at all, but I also knew, of all the books I had ever produced, it was always going to be my favourite baby.
Geraldine