More than TWICE as many votes. 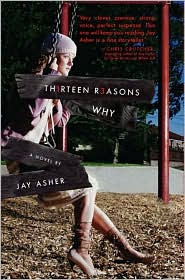 I don't know if it's just the virtual circles I run in, but it seemed to me that few books this year were met with the anticipation that Jay Asher's debut effort drummed up prior to its publication. Now, partially, I'm sure, this is because Asher is One Of Us out here in the kidlitosphere, but not entirely. Not entirely at all. Thirteen Reasons Why is, like Chris Crutcher said in his cover blurb, clever and suspenseful.

The basic (remember, clever) premise is that a teen boy receives a package containing cassette tapes from a classmate. The catch is that this classmate? She committed suicide and these tapes contain 13 reasons why she ended her life. One side per person who did her wrong.

Um. Holy crap, right? Like, can you just imagine? And here we've got poor, bewildered Clay frantically trying to figure out how he could possibly have ended up on the tapes when all he did was have a huge crush on Hannah and make out with her the one time. Meanwhile, Hannah's life unravels via audio diary as she enumerates each step, each person, each painful misconception.

And we get to go along on the... kind of appalling ride.

The funny thing is that really? Hannah isn't that likable a person. She's CLEARLY been wronged. The people on those tapes were not nice or fair to her. But Hannah, in what amounts to her revenge, doesn't really come off any better. It's painful, really painful to read. You have to love the sass and spunk of the girl, but you have to question her desire for spite; her need to give back the pain she receive; the compulsion to make sure the people she blames for her suicide know that they had a hand in it. Wow. Heavy stuff. And yet Asher is able to bring into Hannah's voice a wryness that amuses as it shocks.

Hannah actually kinda hijacks the novel. Ostensibly, it's about Clay, it's through his experience that we see Hannah, outside from her own presentation, but it's her novel, her story. Clay's just the vehicle. She's driving the car, and she's running over a lot of people on her way off the bridge. Clay is able to tell us how much debris is left behind.

This would be a great title for book clubs. Lots and lots to talk about, and such a quick read - if only because like Clay, who can't stop listening, we just can't stop reading.

Other thoughts:
Tea Cozy
Outside a Cat
Jen Robinson
Posted by Jackie Parker at 8:31 PM

This book blew me away too. I just couldn't put it down and had to read it in one sitting. It really made me rethink the conversations that I have with people every day. Definitely a great book! And the cover is spot on. Don't you just hate it when a good book is ruined by a bad cover?

Guess we can talk about it in our Postergirlz group, which is a bit like a book club. Glad you got a chance to read it.

What blows me away about this book is on the surface, it could simply be a "you'll be sorry when I'm dead" melodrama. But, as we examine what happened and happens, we realize not just that people didn't "know" Hannah...Hannah also didn't "know" those around her. As she rages about how people, wittingly and unwittingly, inflicted damage...she is inflicting damage, herself.

Hannah is no saint; she's a troubled, sad, broken girl who is also hurting others.

And yet, I really came to both adore her and want to shake her. Marvelous character.

Yes, yes, let's talk about it at postergirlz (if not at rg at large!) There's SO much to talk about!

I was glad that the book blurb/summary held nothing back about the premise, and that Hannah doesn't sugarcoat anything. Goodness, she was pained.

I agree. She's running the show, driving the car, calling the shots.

This book was just amazing.

"Clay's just the vehicle. She's driving the car, and she's running over a lot of people on her way off the bridge."

I completely agree with that. But wow, that's an amazing way to put it. I love that sentence.