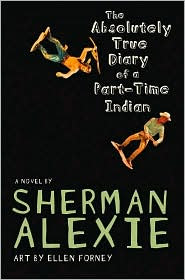 My Grandmother's 90th birthday was in June. I tell you this because it was while on that three hour car trip north (I had already flown 2,000 miles) to her party when I finished Sherman Alexie's first novel for teens. I had purloined the ARC of The Absolutely True Diary of a Part-Time Indian from the collection development librarian. As I closed the book, I observed a moment of silence, thought, "Wow. That was amazing," before turning to my cousin Mike (trapped in the backseat with me, behind our mothers) and saying, "This book isn't out yet, but this fall, when it is? Mike, you HAVE to read it. You'll love it." Being the youngest sibling of 9, he is a bit skeptical and remarked that he'd never heard of the author (this was Michigan; Alexie isn't quite as well-known there as he is in the NW. In the NW, his name is met with a pause of reverence before sentiments of adulation fall from mouths). I told Mike that he would hear of him, and to trust me.

I don't know if Mike followed my advice; I haven't talked to him. However, True Diary IS amazing, and when brainstorming in August about which authors to interview for this week, Alexie came up. Somehow, I got so lucky, and the now the National Book Award Finalist? Yeah. Here on the blog. Unfreakin' believable, right?

1. Congratulations for being a finalist for the National Book Award! What were you doing when you heard the news? What was your reaction?

I was asleep in a Miami hotel room when I got the phone call with the news. I was sleepy and stunned, and ended up being late for a high school appearance. I think I forgot to brush my hair!

2. The Absolutely True Diary of a Part-Time Indian is your first title for teens. Did you set out to write for that audience? If yes, why? Do you plan on writing more?

My adult books have done well with young adults and their teachers and librarians, so I was often asked to write specifically for them. But I never had the right idea until now. And yes, I plan to write many, many more. Dozens!

3. Do you feel that your process or approach was at all different when writing for a younger audience? Do you feel you toned any of your content down?

The only metaphor I have for this process is that my first draft was an adult book, and that my editor and I took fine gauge sandpaper to it, and over the course of a year, we polished it into a YA title.

4. Zits, from Flight, and Junior from True Diary, are roughly the same age. Other than the level of violence and language, what makes one story for adults and the other for teens?

In Flight, Zits drops into the bodies of adults and becomes concerned with adult situations and sensibilities. He might be a teen but all that is secondary to his possession of adult bodies.

5. The opening salvos of True Diary reads almost like a comedy routine. It's self-deprecating and bemoans the treatment and attitudes toward Native Americans. Why choose comedy to share these sentiments?

The simplest answer is this: the two funniest groups of people I've ever been around are Indians and Jews. And so there must be some inherent connection between genocide and humor. I haven't spent a lot of time around other genocided peoples, but I assume they're funny, too. 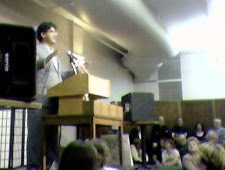 6. True Diary seems to mirror your life in many ways - why did you decide to tell this story through fiction rather than through memoir?

I didn't want to be more self-aggrandizing than I already am. Ha!

7. Both Zits and Junior list The Grapes of Wrath among their favorite books. Is it one of yours, and what does it tell us about these two different characters who are both searching to reconcile their personal heritage with mainstream society?

Grapes of Wrath was one of the first novels I ever read, and its story of poor folks struggling to find a way while having to defend themselves against innumerable attacks, always resonates with me. The last image of the book, where Rose of Sharon, having lost her baby, still has enough love and grace to breastfeed a starving, homeless man, remains my single favorite moment in literature. As a person and writer, I can only hope to show that much love and grace for my fellow humans.

8. Junior is considered a traitor by some Spokane Indians, and brave by others for choosing to go to a school outside of the reservation. Junior considers himself a warrior (p91). Did you, or do you, experience these attitudes for leaving the reservation? How did/do you respond to those attitudes?

Well, most of the tribal folks who really hated me back then are dead now. So, in retrospect, I have much sympathy for them. Their hatred of me was really just a form of self-hatred. And I only wish I could have seen that then. It would have helped me through the tough and lonely days, and perhaps I could have found the wisdom and compassion to reconcile with my enemies.

9. Some of your novels tend toward the episodic and don't follow a strict linear chronology. How do you work with such a structure?

Well, I think Flight and True Diary are linear, unlike my other books. What are these two books linear? Well, I have a tough time writing novels, so I figured out that it's easier process if I write with a strict time- and plotline.

10. "I feel important with a pen in my hand. I feel like I might grow up to be somebody important" (True Diary p6). Did you share this sentiment when you were young? When did you discover that your writing could be a door to a different life? Was writing your lifeboat like drawing was Junior's?

Oh, God, no, I never thought I'd be anybody. I was just hoping to have a good job. In college, when I started writing poetry, I quickly discovered that people of all types listened to me. They paid attention. I loved that attention certainly but I also discovered that I could change people's minds and hearts if they were listening. So, yes, writing, at the age of twenty-one or so, did become my lifeboat and my attack ship!

11. "Poverty only teaches you how to be poor" (True Diary p13). How do your efforts as a writer seek to change this?

This is an impossible question to answer. As a writer, I'm not sure that I can change anything. I certainly can't do a damn thing about poverty. Well, I've written my family out of poverty, but, wow, I don't know who else has gotten out of poverty because of my books.

12. Ever read any of the romances Junior's sister Mary wanted to write? Why make Junior an artist and his sister the writer? Did you want to distance yourself from a character who already shared some circumstances with you?

Growing up, I read MANY Indian man-white woman romance novels. And my real sister loved those books and tried to write a few. So I was honoring the real Mary by making the fictional Mary a writer.

13. According to Junior, Salmon Mush is better than it sounds (p69). Do you have a recipe you'd like to share to prove this?

The quick version: buy a package of smoked salmon, microwave it, and toss it into a bowl of steaming hot oatmeal, add cold milk and sugar, and enjoy!

Sherman, thank you so, very, very much for taking the time to do this. Good Luck!

I apologize for the rather shoddy pics, I took them with my cell, from the floor, at a seriously packed appearance. But *I* took them, so I couldn't NOT include them, right?

For more Sherman Alexie, check out yesterday's interview with the girls at Finding Wonderland.

David Mack at Chasing Ray
Paul Volponi at The Ya Ya Yas
Elizabeth Knox at Shaken & Stirred
Ellen Emerson White at A Chair, A Fireplace and A Tea Cozy
Jack Gantos at Seven Impossible Things Before Breakfast
David Levithan at Not Your Mother's Book Club
Micol Ostow at Bildungsroman
Laura Amy Schlitz at Miss Erin
Kerry Madden at Hip Writer Mama
Posted by Jackie Parker at 12:15 AM

Hm. I'm tryin' here, but I'm not sure I'm feeling it. Without the sugar, yes. Without the milk, yes. But with sugar and milk?

But this is a minor point to detract only marginally from the greatness of a really generous man and a great interview. Brava! And I'm so crossing my fingers for that National Book Award, it isn't funny...!

I'm not feeling the salmon mush either, but still, another awesome interview.

Definitely looking forward to more YA books by Alexie.

And admitting that he read "MANY Indian man-white woman romance novels" makes me like him even more. And I have to admit, when I got to the page with those fake covers for Mary's book, I cracked up and thought, "Oh my god, Alexie should totally write one of those next!"

Oh, what a fun interview! Great job with it! And I thought the personally-taken photos added a great touch. :)

Thanks for the great interview! I'm glad to hear he'll be writing more ya books.