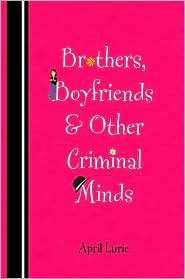 Remember The Wonder Years? Brothers, Boyfriends and Other Criminal Minds reminds me of that. There's a sweet nostalgia about it. It doesn't drown the reader in 1977, but soft little touches of setting and time imbue the novel with a very specific era; it's a delicate balance, and April Lurie succeeds with ease and humor.
This one didn't make it onto my radar prior to its nomination for the YA Cybils, and it's books like this that really make me happy to be involved with the group. Whatever influence I have (and I judge this to be rather negligible, but nevertheless), I relish the idea that I get to tell you all about funny, sweet stories like Lurie's that might have just slipped past your (and my) notice.
So, 1977. Brooklyn, NY. Our heroine, April, has got a crush on the Bad Boy Rocker from school. She finds an unexpected in with him when she starts walking the "retarded" (unclear how - but I suspect autism) Larry from across to and from school. Bad Boy Rocker (Dominick) discovers that Larry's a genius drummer and soon April and Dom are going out. Sorta. April's potential bliss is endangered by an older brother (his annoying friends) and his attachment to a mofioso's daughter.

It's a slice of life, and subtle layers and depths that were rather unexpected with the bright pink cover (a cover that makes me shout "jazz hands!" for some unknown reason). Lurie was smart in her choices of pop references (it is continually disturbing to me that we still know John Travolta) as those of us who never experienced the 70's (yep, me) will either know the references anyway, or won't need to.
Fans of The Wednesday Wars (um, prolly more of the girl fans. But there's MOBSTERS! if you are good and focus on that, I bet you could get boys to pick it up despite the pinkness) will love this.
Posted by Jackie Parker at 8:28 PM

I just wanted to let you know that I've given you an award: "A Roar for Powerful Words," through the Shameless Lions Writing Circle. Check it out at my blog here:

Love your blog! Have a happy holiday Jackie!

Thanks so much for a wonderful review! I'm so glad you enjoyed Brothers. You really made my day.